Bulthaup kitchens are said to be the culmination of the integration of elegant design, technological excellence and manufacturing perfection. In addition to the undeniable quality that is part of its product series, Bulthaup also pushes the boundaries of the very concept of a kitchen and the understanding of what it can be, offering completely innovative typological models. In addition to the well-established “minimalist” models which set the standard, the Bulthaup product range thus also features series such as the b2 whose concept traces back to efficient workshop cabinets. These remote references are creatively reshaped into very functional, aesthetically unusual and harmonious assemblies suitable for integration into various kinds of living spaces. 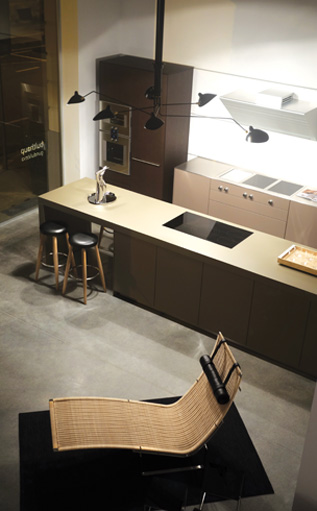 The b3 kitchen bring limitless design freedom to the livingspace. The b3 multi-function wall liberates the kitchen from the classic planning method and becomes itself the determining factor in the room’s architecture. The wall conceals instalations and allows cabinets to appear as though they are floating. It becomes active, as functional as it is beautiful, and can merge the kitchen and living space together to form a single unit. 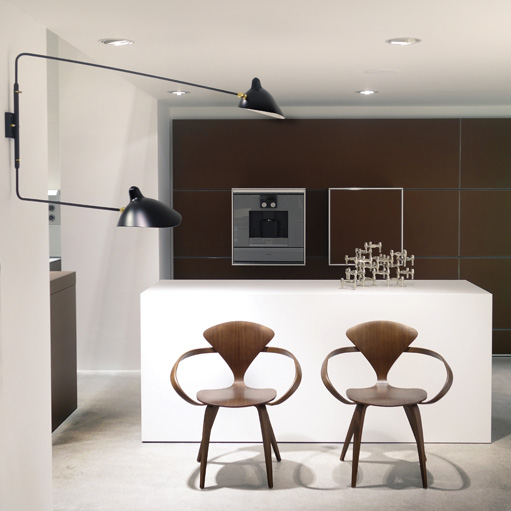 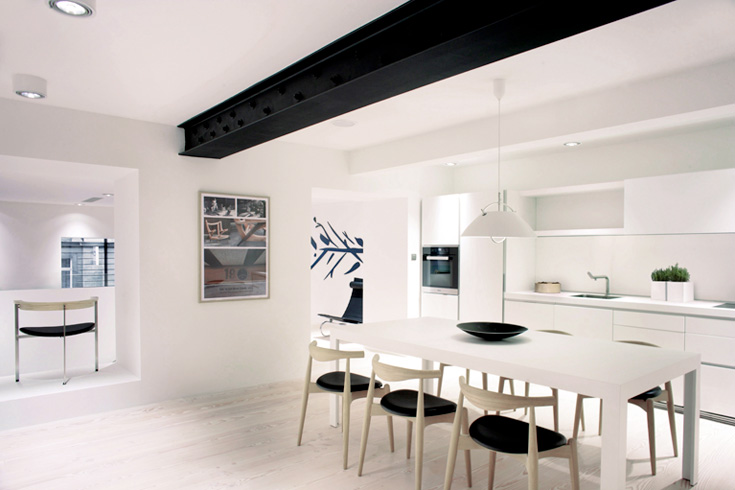 The b1 is the “essential kitchen”, with timeless, efficient design that focuses on essentials and offers the perfect marriage of form and function. It was designed and built for the growing number of people who have a keen eye for elegance of form and quality of construction people who accept no compromises when it comes to aesthetics and function, authenticity, craftsmanship and perfection in each and every detail. Intelligent minimization makes many things simpler, easier and better,” said master of design Otl Aicher. This idea underlies the bulthaup b1 philosophy. 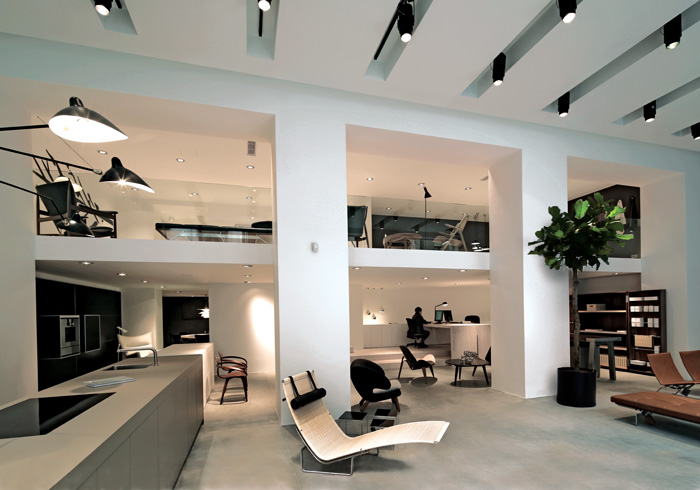 Unlike other Danish and Scandinavian furniture designers who prefer using wood, Poul Kjærholm generally used steel as his construction material. He was particularly interested in the relationship his works had with architecture. The use of thin, elegant steel elements enabled him to design visually lightweight furniture that stood out and was expressive, but at the same time airy and unpretentious in a room setting. Kjærholm’s furniture is regarded more as a spatial composition, and less as a static ‘object’. He researched various combinations of natural and artificial materials such as marble and leather, giving particular heed to the grace of gradual aging of furniture with years of use. 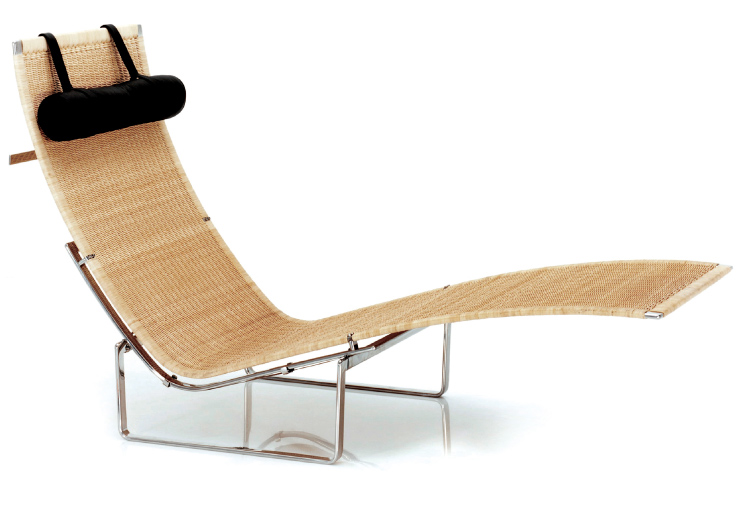 Its simple curves and organic form make it one of P. Kjaerholm’s most recognizable pieces. The inspiration for this recliner comes from the Rococo period and French lounge chairs, which had the same curvature and dimensions. The wicker curve of the recliner has no physical connection to the base, the steel pedestal; instead the elements are held together by gravity, which led Kjaerholm to call it the Hammock Chair. 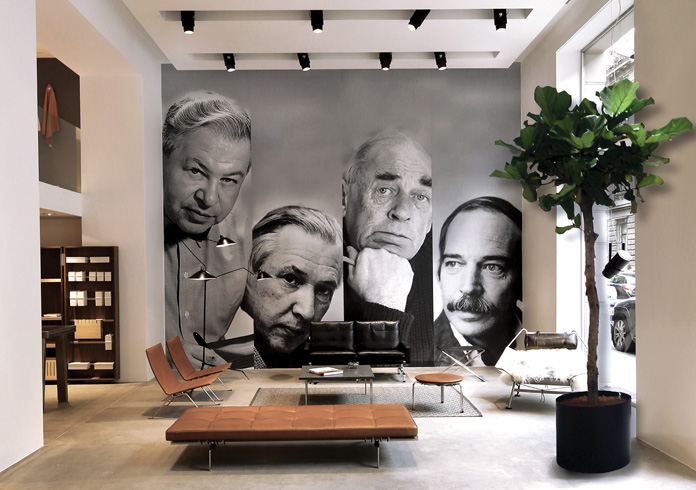 In an attempt to combine superlative aesthetics with functionality, Paul Kjaerholm designed the PK80 Daybed. Thus one of Kjærholm’s most sophisticated products was created. Daybed is a clear illustration of Kjaerholm’s method of redefining historical models. The idea came from Bauhaus, where the main inspiration was the ancient Roman couch. When the Museum of Modern Art in New York bought the PK80 for its galleries in 2004, Daybed found its place in the history of furniture. 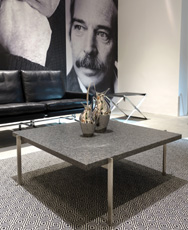 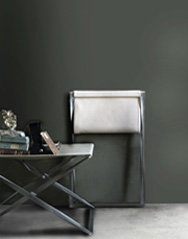 The table is an elementary minimalist design from the hand of Poul Kjærholm. Despite the extreme distillation of the structure into a set of identical elements, the square and aesthetic design have the power of a manifesto and show Kjærholm’s development from industrial designer to furniture architect. The four base elements are joined with machine screws that lend the table part of its unique look. The removable tabletop shows Kjærholm’s principle of using gravity to keep the elements in place.

This stool epitomizes the unceasing adaption of historical furniture categories in Kjærholm’s oeuvre and in his arsenal of expression. The source of inspiration for the PK91 is an ancient Egyptian folding stool dating back to ca. 1500 BC. The designer’s method of refining historical furniture types has again been put into play, and the result is unmistakably Kjærholm’s classically elegant and minimalistic interpretation of the chair. The PK91 is part of the permanent collection at the Röhsska Museum in Gothenburg, Sweden. 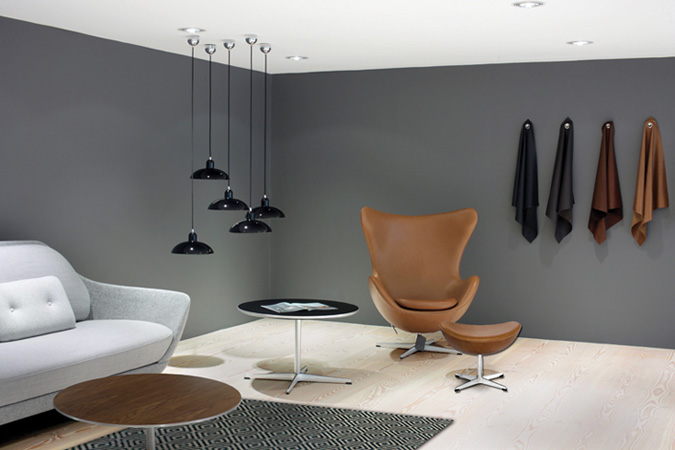 For Danish architect Arne Jacobsen, who made his mark on international architecture of the mid-20th century there was no difference between the design of furniture and the entire buildings; between details and the whole. His aim was to create aesthetically and spatially impeccable harmonized environments. Early in his career, Jacobsen experiments with bent plywood and in 1951 designed the exceptionally popular Ant Chair. While insisting on pure geometry in architecture, in design he was interested in sensual shapes and comfort. His pieces such as the Swan Chair, initially designed for the famous SAS Hotel in Copenhagen, are icons of modern culture.

Originally the chair was created in leather, with Kjaerholm’s idea to utilize strips of leather offcuts remaining from other products in the factory, to avoid waste. In the end the idea was rejected and only the finest leather strips are used today. The armchair is part of the permanent exhibit at the Victoria & Albert Museum in London. 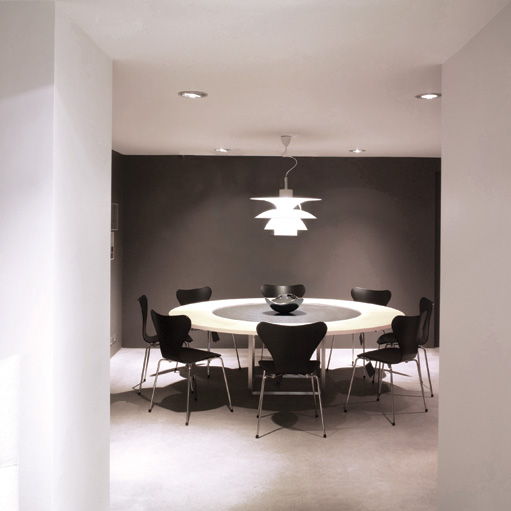 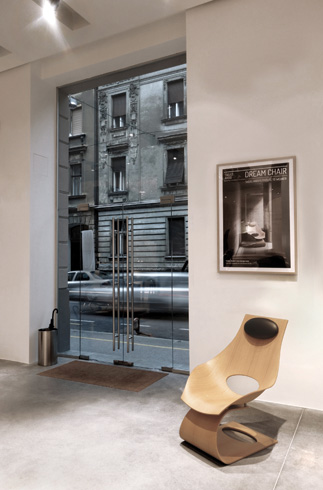 Japan’s Tadao Ando, one of the most important of contemporary architects, has based his entire body of work on connecting the cultures of the Far East and the West. From the East he takes the restrained aesthetics and refined sensibility for materiality and nature, while the rational builder’s tradition and affinity for geometry are the heritage of the West. Ando chooses his tasks carefully and deals with product design only in situations in which he feels he can make a substantial creative contribution to the field. The Dream Chair, designed for Carl Hansen & Son, is such a case. Shaped freely yet very precisely thought-out at the same time, the chair is a tribute of the great master of architecture to Danish designer Hans Wegner, which supports the opinion that Danish design is a kind of “Japan of Europe”. 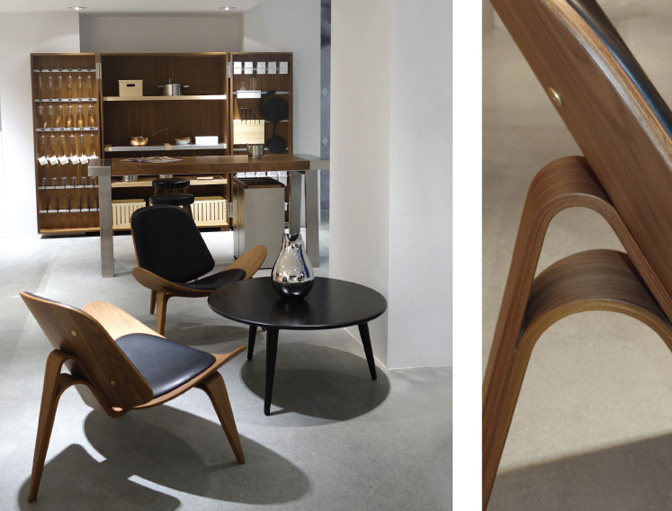 The chair achieves a floating lightness due to its wing like lines. It was designed 1963 for the annual Furniture Guild Exhibition in Copenhagen. Because of its advanced and avant garde shape, the real success achieved in early 80’s on international auctions, and won several design awards. 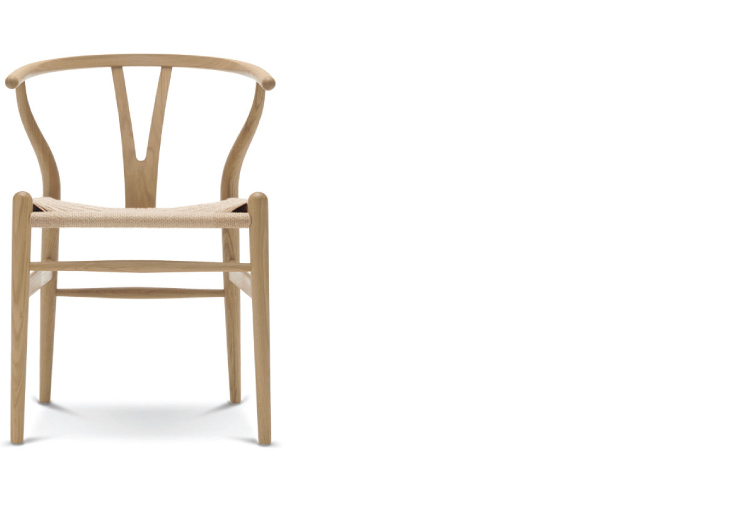 This chair is an excellent example of Wegner’s tendency towards consistent simplicity and also his most famous work. The inspiration comes from ancient Chinese armchairs. More than a hundred manual operations are required for one of these chairs to be produced, while the hand-woven seat is made out of 120m of paper twist. 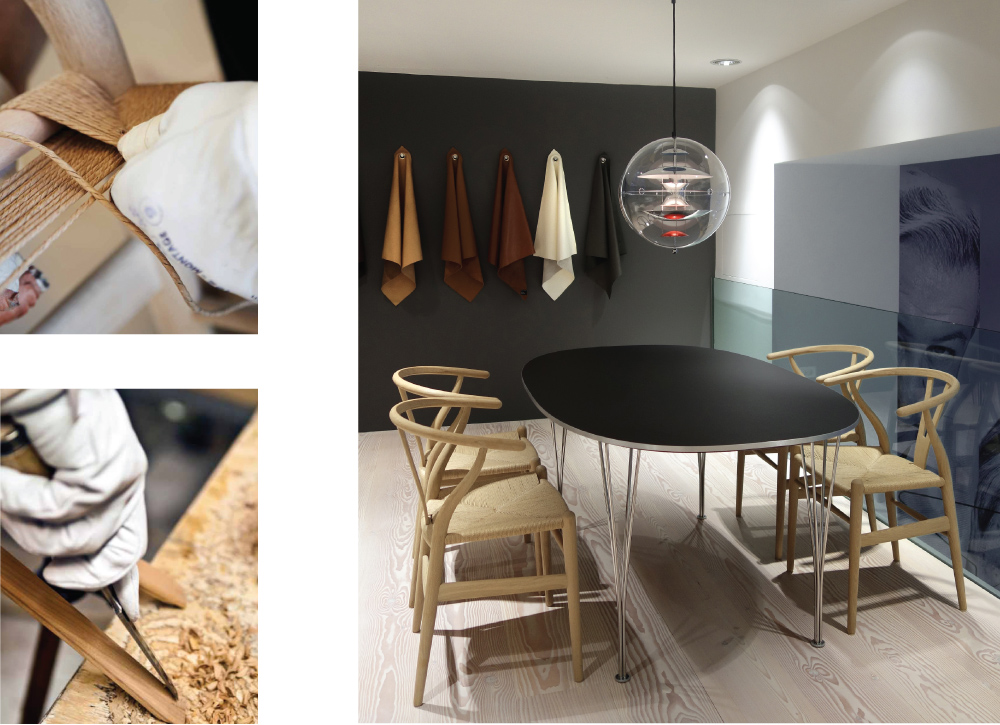 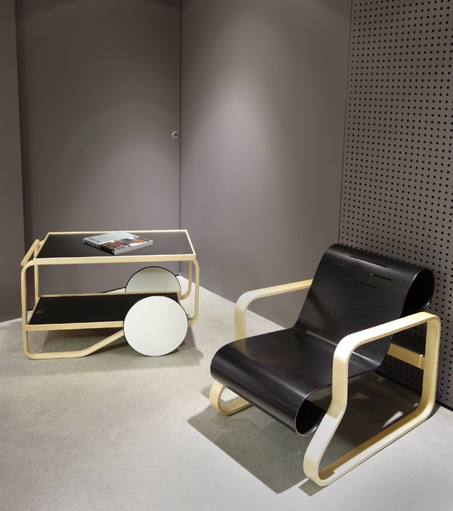 Finnish architect and designer Alvar Aalto is known as the father of modern Scandinavian architecture and design; a creator who profoundly influenced the international modern aesthetic as well as the ethics of design during his prosperous career. Aalto’s impeccable sensibility for nature, landscape, and everyday things allowed him to enrich the purity and abstraction of modernism with organic and poetic shapes. Aalto advocates qualities of simplicity and functionality, and has experimented with a number of themes – from glass objects to furniture series. As a result, even today, numerous examples of prominent design exhibit traces of his influence. The Paimio Chair of 1932 was a pioneer project made with bent plywood and solid wood, and is just as ingenious in construction as it is influenced by abstract art. It has been an absolute classic from the moment it was made. 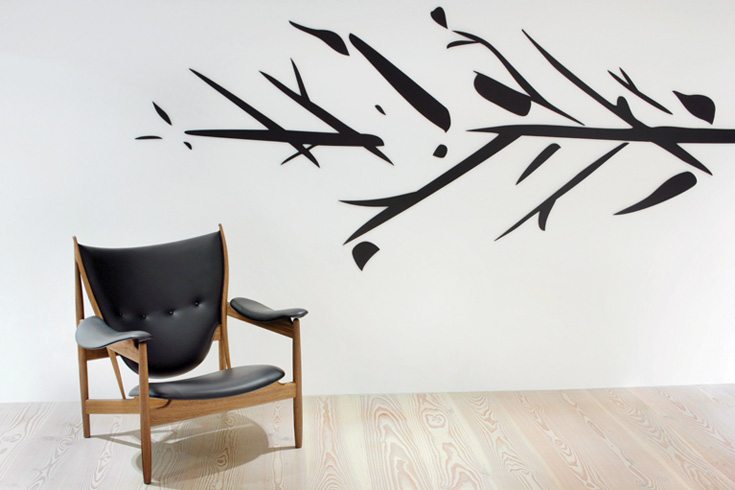 Finn Juhl created the chair for the 1949 Cabinetmakers’ Guild in Copenhagen. During the exhibition, King Frederick IX sat in the chair, causing a journalist to suggest calling it the “King’s Chair.” But Juhl didn’t like how pretentious that sounded and said, “You had better call it a chieftain’s chair,” which the journalist did. 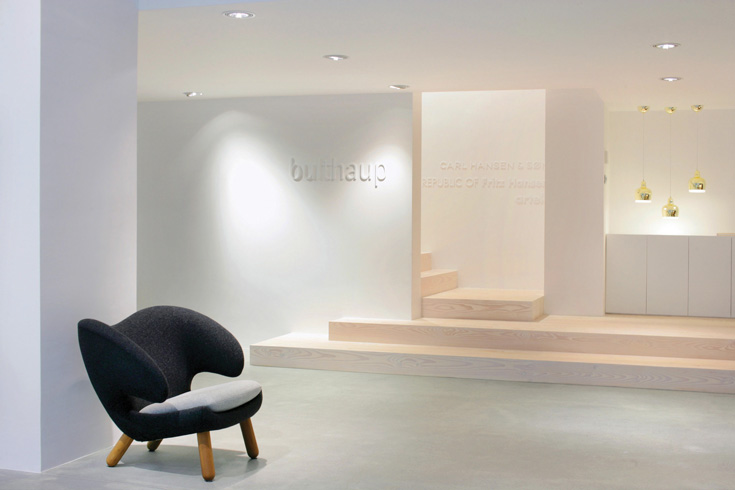 Among Nordic designers, Finn Juhl stands out with the expressiveness of his works and the fine balance of references to tradition and the explorative approach. Educated as an architect with notable commissions such as participating in the interior design of the United Nations building in New York, Juhl boldly but wisely stepped out of convention with pieces such as the Pelican Chair, experimenting with atypical proportions and picturesque compositions. The Chieftains Chair, however, was designed with enjoyment, and abounds in finesse and formal ideas making it entirely unique. 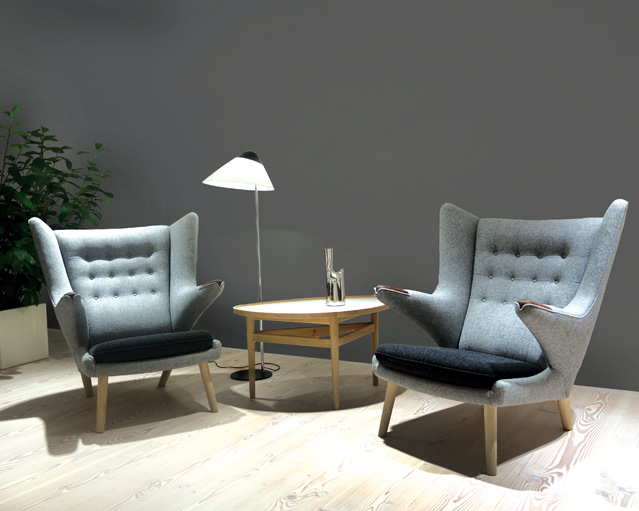 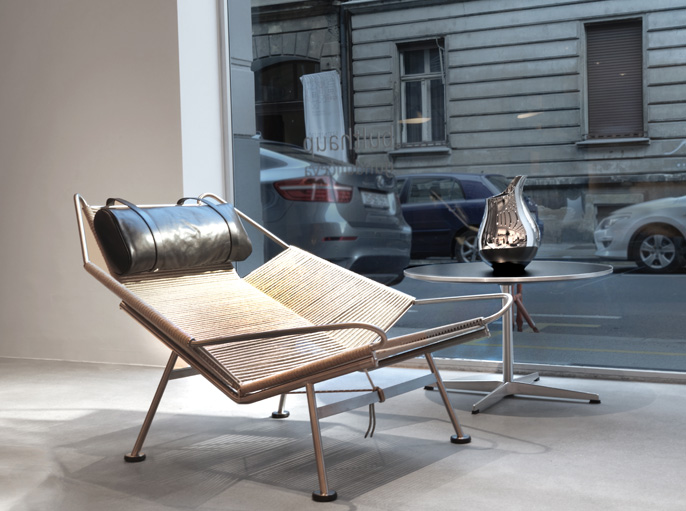 With a frame and base made of stainless steel, the seat and back of the chair are made out of 240 meters of flag line. The basic idea came about at the beach as Wegner was digging himself into the sand and found the most comfortable form for resting. With this design, Wegner showed the same skill, boldness, and elegance as he had with wood to which he had a preference. This was his tribute to the early modernists such as Le Corbusier, Mies Van de Rohe and Marcel Breuer. 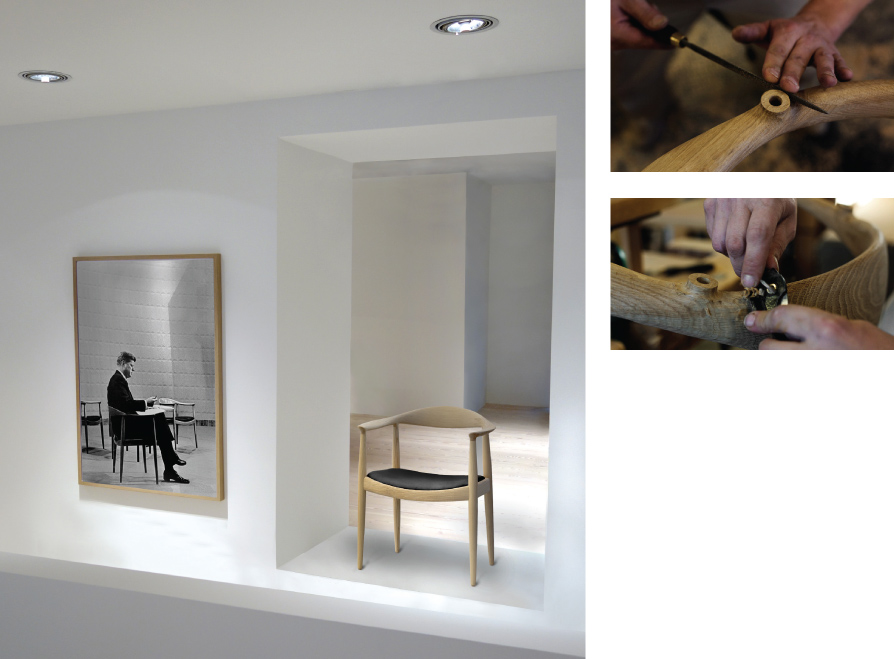 For serious connoisseurs of design today, Hans Wegner is synonymous with a thoughtful and restrained approach that characterizes the Danish and Scandinavian modern culture of furniture design. The most important part of his oeuvre consists of numerous items of seating furniture — chairs, reclining chairs and armchairs. In those particularly demanding genres Wegner insists on comfort and unobtrusive visual and tactile pleasure, further heightened by his affinity for traditional material — wood. Wegner’s path of development was gradual and based on the careful refinement of concepts. Early works rely on historical models, especially those from the Far East. Over time, Wegner came to a dignified aesthetic that is both modern and timeless. 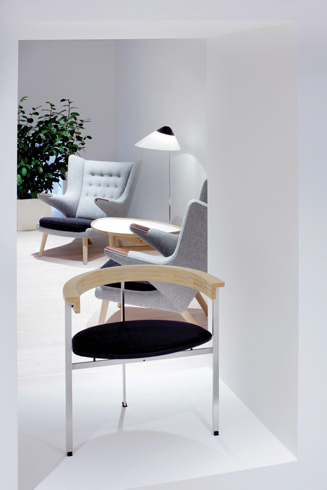 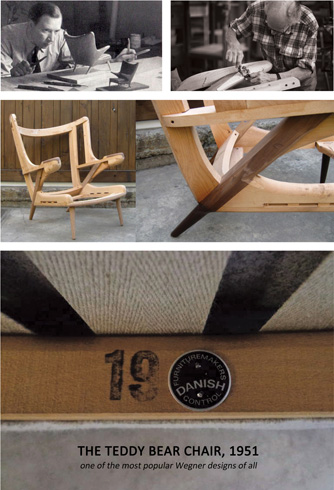 The Teddy Bear Chair was the first Wegner design for pp møbler, and marked the beginning of years of passionate collaboration involving generations of gifted Danish craftsmen in the production of this and numerous other Wegner products. Two weeks of manual labour are needed to produce each chair, in order for each individual piece to attain the highest standard. This is what makes this chair a lifelong investment and Wegner’s most exclusive piece. 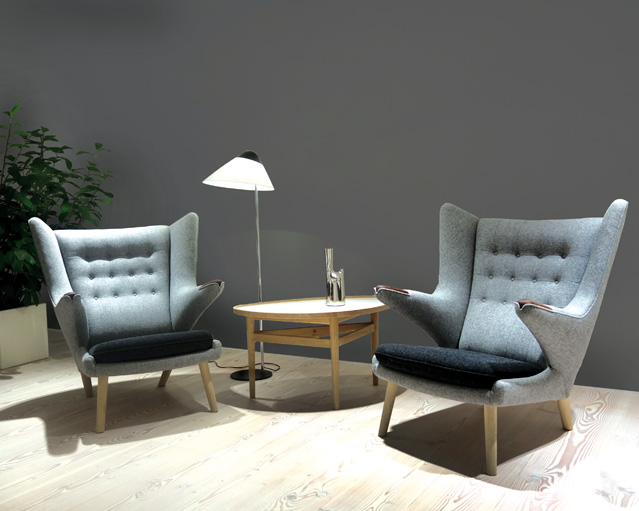 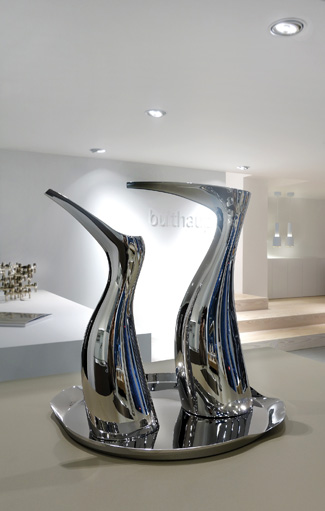 Small items are as much an important part of design culture as is furniture. Danish designer of silverware and ceramics Georg Jensen established himself in the first half of the 20th century, at the turn from Art Nouveau towards Modernism. His numerous elegant works that combine the sensitive sculptural approach and reduced design language are still in production today, and the Georg Jensen company continues the tradition, still offering a wide range of products signed by many designers. Jensen is characterized by the unique ability to attune artism and accessible design, and his works are now classics in their genre.